Posted on November 6, 2019 by Susanne Swanson

Although Seattle’s nickname is the Emerald City it could just as easily be called the Blue City.   Surrounded by water, Seattle lies on a strip of land between Puget Sound and Lake Washington.

The first white settlers to the area – the Denny Party – arrived in Puget Sound by schooner at Alki Point on November 13, 1851.  They named it New York,  later adding the Chinook word, ‘Alki’ meaning ‘by and by.’  New York-Alki.

We visited Alki Beach recently on a cool fall day when the water was choppy and intensely blue.

We found a replica of Lady Liberty standing tall –

and the Space Needle doing the same in the distance. 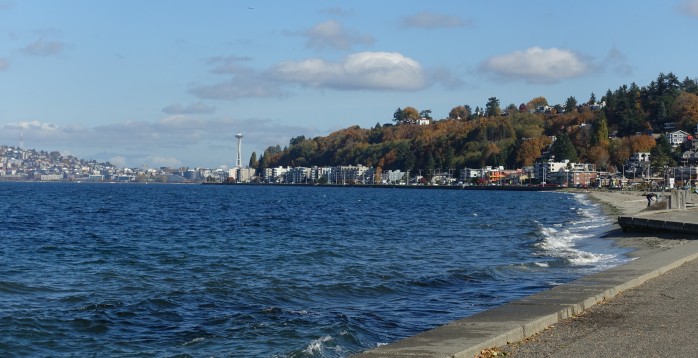 We walked a bit then had lunch at Spud’s Fish and Chips – the best in town since 1935.

Inside the restaurant pictures of Luna Park covered the wall.  Known as the Coney Island of the West, Luna Park operated at Alki Beach from 1907 to 1913.  The pictures were taken by an early Seattle photographer, my great grandfather, O.T. Frasch, just so you know.

His work was prolific during the early 20th century, documenting much of Seattle’s early downtown and events including its first world’s fair, the 1909 Alaska-Yukon-Pacific Exposition held at the current site of the University of Washington campus.  (Sounds interesting, huh? I may have to pursue that in a later post.)

Before heading home we stopped by for more views of the Seattle skyline.

Which looks even better at sunset.  I happen to know this from dining at Salty’s last month where we celebrated our anniversary.

← A Fall Day with Purple and Gold
Fall’s Early Twilight →

22 Comments on “Alki Blues in Seattle”