Salmon Mosaics and the Sockeye of the Cedar River

The salmon have returned to spawn on the Cedar River, primarily Chinook, Coho and Sockeye. Their journey was not a simple one.  Having left the Pacific Ocean, they entered Puget Sound, made their way through the Ballard Locks,  into the fresh water of Lake Washington, and are now fighting against the current to return to the place of their birth.

I was happy to see them in great numbers at Cedar River Park – their beautiful colors shining beneath the surface of the river like a mosaic.

I took these pictures near the Weir, a strange looking contraption designed to capture Sockeyes for transport to the fishery at Landsburg.

But why?  The answer is a bit complicated but goes something like this: 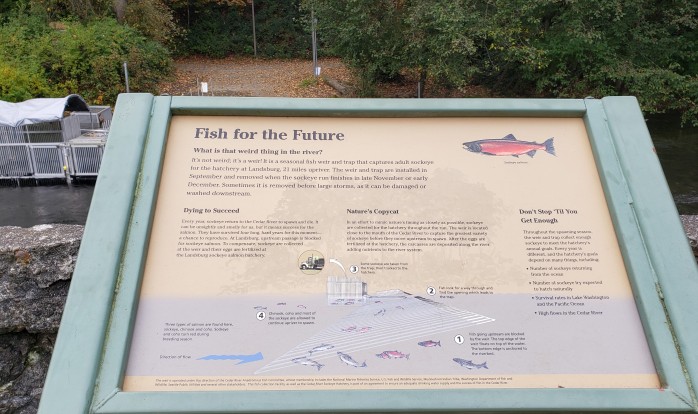 I was sad to see the captured salmon. I wish they could travel their final course naturally – without man’s interference – even though they have the same fate no matter how they make it up the river – to spawn and die.

In fact, sockeye aren’t native to the Cedar River.  They were introduced after the river was rerouted and the Ballard Locks were built almost 100 years ago. Still, I’m glad they’re here now. Aren’t they beautiful?

← The Cruise Begins!
The Cruise Continues – On to Astoria! →