A Capitol Tour of the Other Washington

The Other Washington – that’s us – the beautiful,  most northwestern state in the United States of America.  Olympia is Washington’s capital and that’s where I’m going to take you in this post.  Though I’ve been to Olympia many times,  I’d only been inside the Capitol Building once, and that was on a school trip many years ago.  So on a cold and sunny winter’s day we thought it was a good time to explore the domed capitol that looms over our state capital (and yes it’s hard to keep those two words straight – I hope I got it right!)

Washington’s State Capitol Campus was designed  in 1927 by the Olmstead Brothers, planners of New York’s Central Park, and includes 50 landscaped acres with spectacular bulbs and plantings and old growth conifers. I’ll need to return later this spring to see all those bulbs in bloom. In the meantime the camellias were lovely,

As was the fountain, a replica of Tivoli Fountain in Copenhagen, Denmark.

Several memorials adorn the grounds,  including the Winged Victory Monument, installed in 1938 and dedicated to veterans of  World War 1.

The Campus includes a group of classical buildings but the centerpiece is the Legislative Building completed in 1928.  Its brick and sandstone dome rises 287 feet to the top of the cupola, making it the tallest masonry dome in North America. 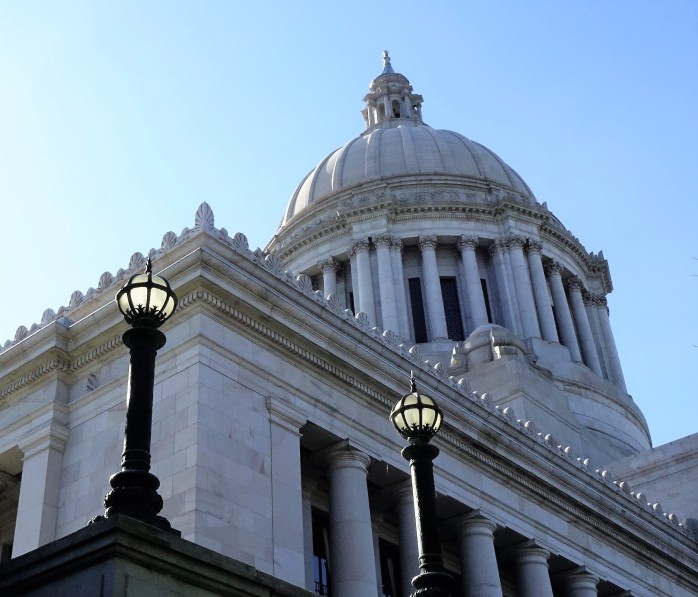 As we approached the building we were greeted by a peaceful demonstration on the front steps  –  nothing like a good protest to prove that democracy is working.  This one was lobbying against a proposed methanol plant in Kalama on the Columbia River, that would use natural gas obtained through fracking.  (Do we really want to stir things up with fracking in earthquake country?? I don’t think so.)

We listened for a few minutes before heading inside where we saw the chandelier suspended from inside the dome overhead. The largest ever created by Tiffany Studios, the 5-ton, 25 foot tall chandelier contains over 200 lightbulbs and hangs from a 101 foot chain. 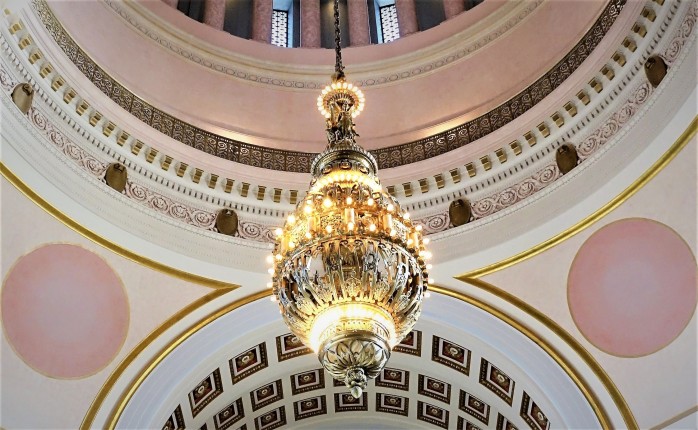 Other Tiffany light fixtures can be found throughout the building as well as four statuesque Roman-style firepots, replicas of those used to call the first Senate into session more than 2,000 years ago.

It was also fitting to find a bust of George Washington in the only state named after him. 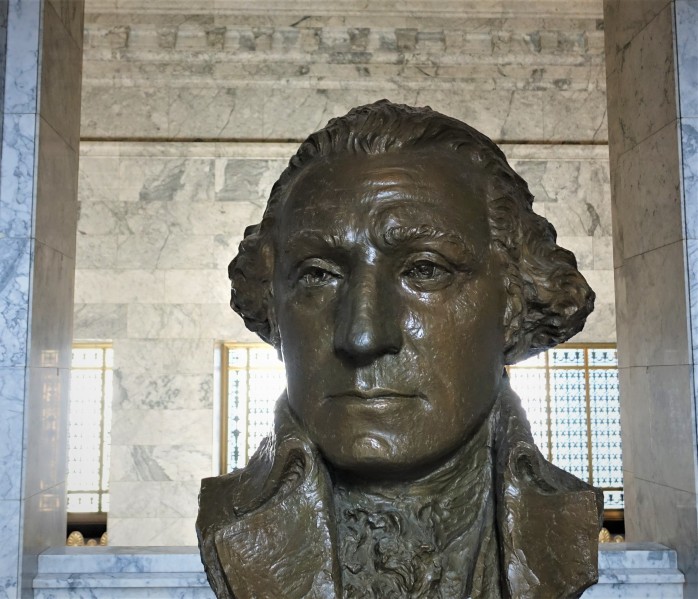 As we continued to explore inside the building we came across a special exhibit on 1968,  that showcased some of our local icons.

It also included exhibits on Dan Evans who was Governor at the time – and surprise! –  he was governor the last time I visited too!  (Please don’t do the math. 😉 )

Though entreated in the letter above, I don’t think he ever ran for President. But our current Governor, Jay Inslee is considering such a run – along with dozens of other Democrats – so  you may be hearing more about him.

As our 2-hour parking privileges were nearly up we headed out to lunch at Budd Bay Café where I had a wonderful Caesar salad with Dungeness crab and shrimp, the perks of living on Puget Sound.  Afterwards we enjoyed a walk along the waterfront at Budd Bay inlet.

All in all it was an interesting day.  I don’t think I’ll wait another 50 years to return to the Capitol Campus.

← Tiger ~ musings on the early days
Just Because I Love Sunsets →

15 Comments on “A Capitol Tour of the Other Washington”