Day 1 – Sue here.  As I sit in my office on the third floor of our home, Tiger is relaxing nearby.  After a final deep cleaning behind the ears (who can sleep with dirty ears?)  he’s ready to call it a day and drifts off into kittyland. 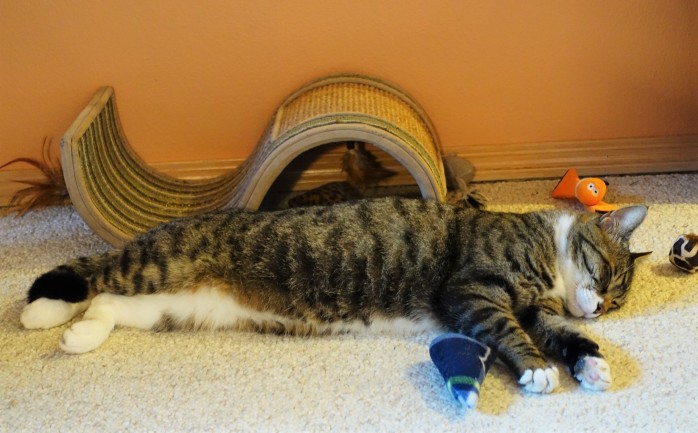 Little does he know that two levels below, there’s a little Tiger cub hiding under grandma’s bed. We visited Seattle Humane today and brought home a new kitty as a companion for Tiger. His name is Ben. Or Benji.  We’ll see what sticks.  He’s a 10 month old mini Tiger with golden almond eyes and a scruffy ear.  Brown and gray like his new big brother. He came from the home of a hoarder, where he lived with 40 other cats.  We picked him out when we saw him snuggle in the bosom of another sleeping cat.  Ah, that’s the one, we said.

Tiger lived with his big brother Shadow for 7 years.  But Shadow wasn’t the healthiest kitty and is no longer with us. We miss the sweet fluffy boy, but are happy for the years they had together.  Now it seemed time for a little brother to be added to the family. Tiger can show him the ropes of the cat kingdom.  How to hide in the bush.  Chase moths.  Hunt moles.  And drink from the flowing stream in the backyard.  But not yet.

We’ll let Ben decide when to come out of hiding. He has everything he needs in his room below.  When he’s comfortable with his new home, we’ll begin the introductions slowly, swapping the cat’s scents and toys. Supervising visits.  We want their first meeting to be all good. Tiger has given no indication that there’s an intruder so we have the time we need.

Day 2 – We’ll that was quick.  The little rascal is out and ready to explore his new world! Fearless!  So here’s Ben!