A Walk at Coulon Park on the Last Day of Winter

But don’t be fooled – we hit 80 degrees yesterday,  the highest temperature ever recorded here in the month of March.  What better day to take you on one of my favorite walks –  at Gene Coulon Park in Renton, on the southern shores of Lake Washington.

Lets start at the very beginning –  near the new Hyatt Hotel and Boeing plant at the end of the lake.

Folks wearing badges were outside enjoying the sunshine, which tells me the Hyatt is fast becoming a conference destination. Nothing wrong with that.  But I was happy I wasn’t with them – I had my share of work conferences –  instead I headed north on a walk through the park.

My first stop was Bird Island, recently renovated as part of a Shoreline Enhancement Project by the Washington State Department of Natural Resources.

According to their website,  “Just off shore in Renton’s Gene Coulon Memorial Beach Park, the heavily-visited Bird Island provides habitat to a number of wildlife species, including juvenile Chinook salmon who enter Lake Washington from the Cedar River. Juvenile Chinook salmon prefer shallow sandy shorelines with overhanging vegetation. Bird Island provides a unique opportunity to improve habitat for these migrating salmon due to its proximity to the mouth of the Cedar River. “

It’s a tiny but beautiful island and I’m happy to know it provides a refuge for the young salmon who need all the help they can get.

Look off in the distance and you’ll see the Seattle skyline to the north.

Or better yet, look west and gaze at the Olympic Mountains floating majestically above the lake.

Leaving Bird Island, I passed the swim beach where children were playing in the summer-like weather. 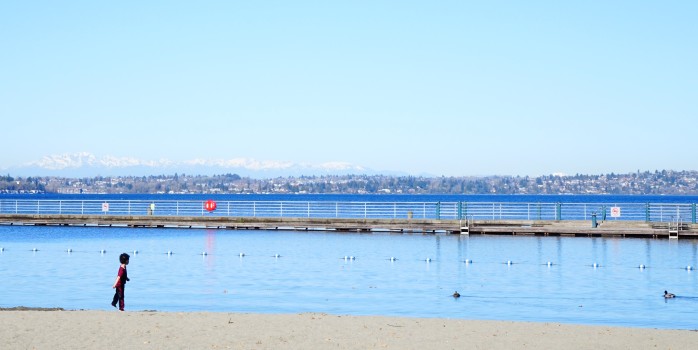 Then it was onward to the boat ramp, 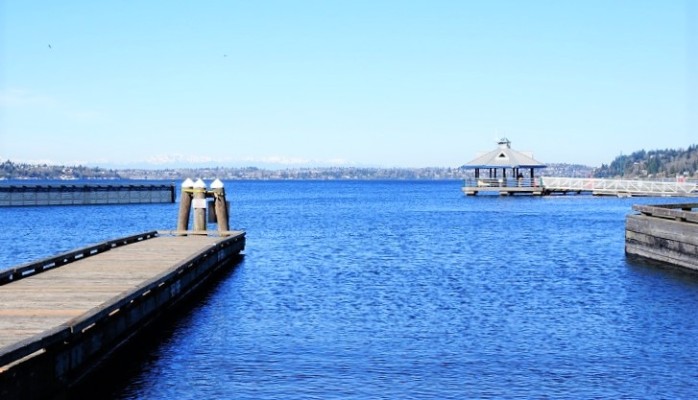 where I watched a yacht come in and tie up nearby.  Wouldn’t that be nice? 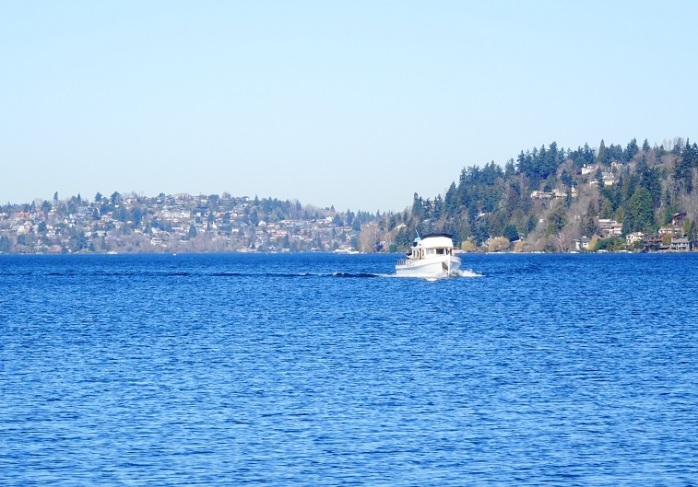 I skirted around the two restaurants and dock nearby being renovated –  Ivar’s Fish ‘n Chips and Kidd Valley in case you wondered.  I prefer the fish ‘n chips myself though not today. 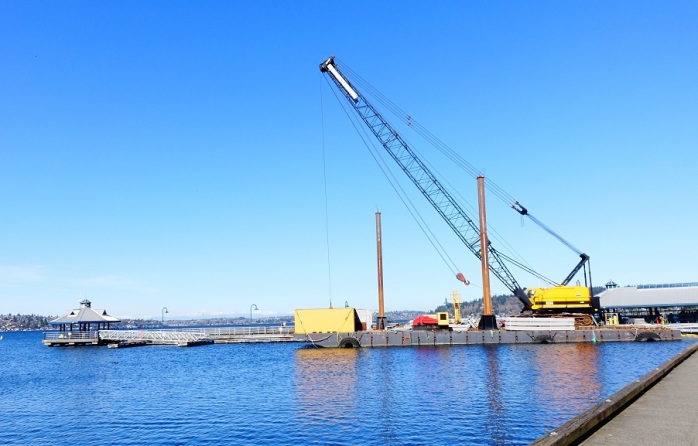 Continuing on the walking path I was encouraged by the stony walkers strutting their stuff. 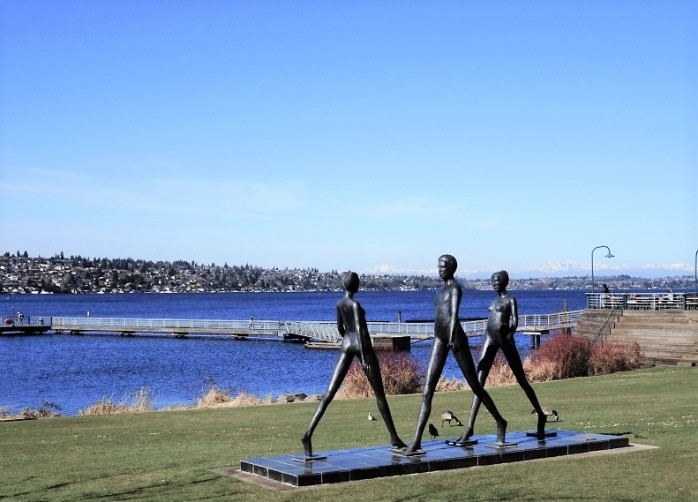 I stopped for a look at my favorite sailboats, all lined up and buttoned down. 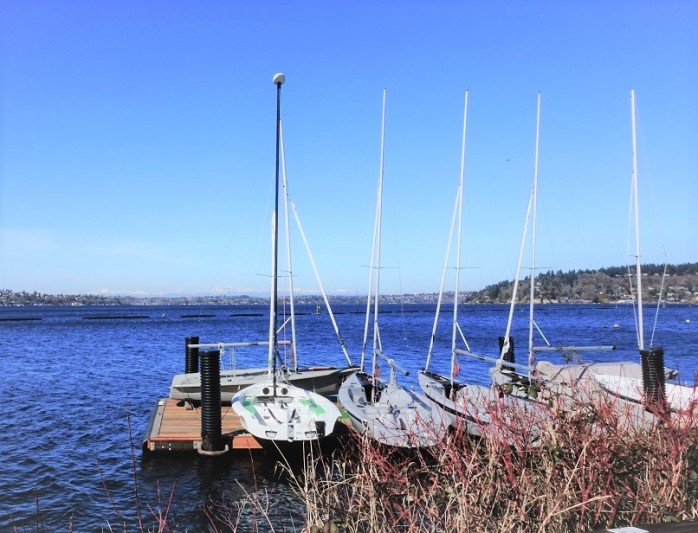 I continued on and was treated to a bald eagle soaring above the lake – o the joy!  It stopped and perched in the tree tops high above,  soon followed by a female who settled in nearby. 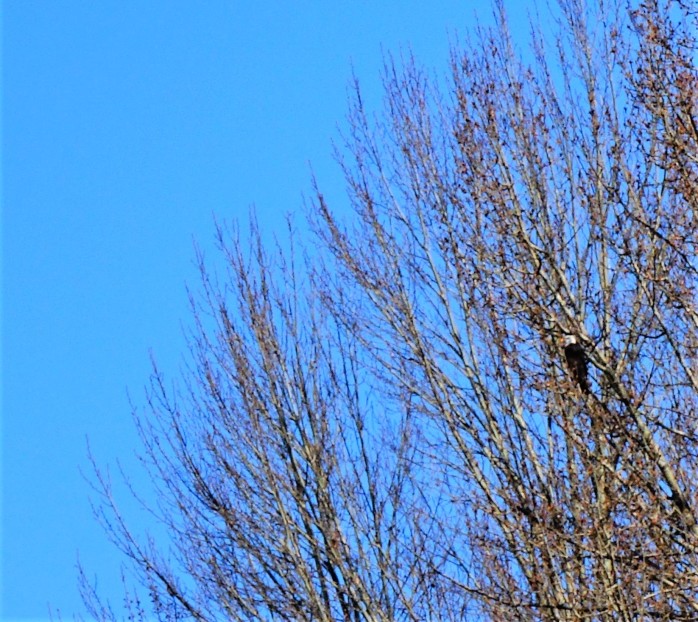 I watched them for a while before moving on and arriving at the bridge over the Shore Walk.

I call it the Turtle Bridge, as the log nearby is often covered with turtles basking in the sun. Today they seemed to prefer the cool waters of the lake.

More boats, some docks and piers and I’m near the end of the path where I turn around and head back – a lovely walk, less than 2 miles round trip.

Now facing the bright rays of the sun, I try my best to capture the beauty of the Mountain looming above the south end of the lake. 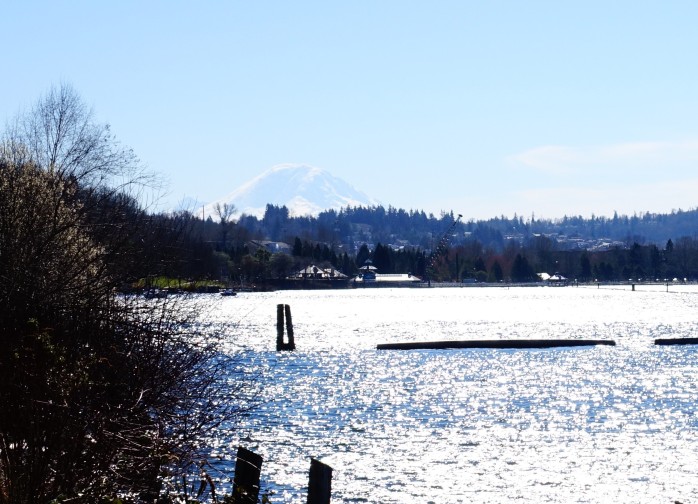 The picture’s not great – too much glare – but Mt. Rainier is, don’t you think? 🙂

I hoped you enjoyed today’s walk, inspired by our awesome weather and shared with Jo’s Monday Walk.