A trip to Siberia … and a Coup!

Would you vacation in Siberia?  Would you?  What if it you knew there would be an attempted coup that might threaten your return home to these United States of America?  Well no, I wouldn’t, but yes, my mother did.  And so I will take you on a journey to Magadan and Khabarovsk in Russia’s Far East, during the waning days of the USSR.

It was August of 1991 and Alaska Airlines had begun flying to Russia from Anchorage, Alaska.  My mother had remarried after being widowed some years before and she and her new husband decided upon this unusual vacation. (Apparently after the honeymoon in Hawaii the next logical place to go is Siberia?) 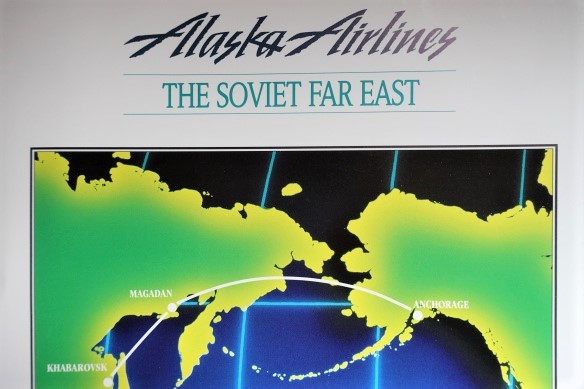 After spending a few days in Alaska, they fly west to Magadan, a port city on the Sea of Okhotsk in Russia’s Far East. Magadan was a major transit center during the Stalin era for prisoners sent to the Siberian labor camps. It served as a staging ground to the Kolyma gold fields, the deadliest of the camps in the Soviet Gulag.

It is still a difficult existence. Their two local Russian guides are teachers, and they earn the equivalent of eight dollars a month.  Senior citizens in town are required to clean the streets to receive their pensions.  Scenes from a town in disrepair reflect its painful past. 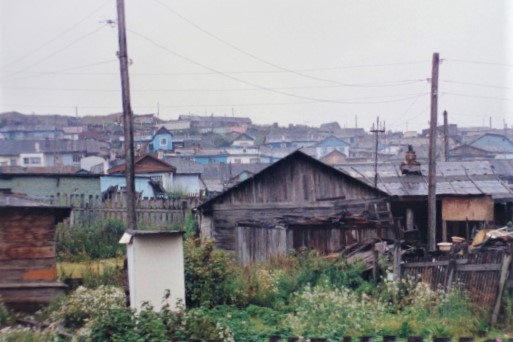 The accommodations at the Magadan hotel (the only hotel in a city of 100,000) are what you might call basic. The hotel was previously used almost exclusively by government officials.

The beds are tiny though each room does have its own private bath. (Uh-huh, see for yourself.)

No, she’s not complaining. The water was hot (at least when the pumps were working according to one local) and the experience invaluable.

They tour the town and visit the Magadan Theatre, famous for the actors, writers and directors who had worked there in the past as prisoners.

It’s a good thing they didn’t go for the food.  One time they sat down to a lunch that included Russian bread the color of gold.  Beautiful gold that seemed to flow. And as they watched, the gold poured out of the center of that bread in the form of tiny ants.  Lots of them.  (So mom, tell me again why you wanted to vacation in Siberia?  Oh yeah, I remember now, because it’s there!)

They head south to Khabarovsk, a much larger city on the Amur River near the border with China.  The people are friendly and the children beautiful, as are children everywhere.  It was customary for the little girls to wear big bows in their hair.

They visit an old-fashioned theme park..

Take a cruise on the Amur River.. 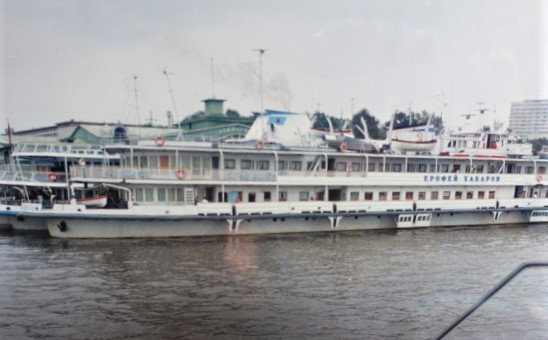 And stop at a Military Museum complete with Russian tanks. 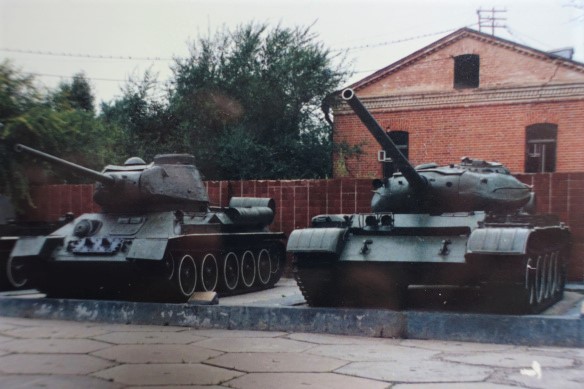 But why settle for that when you can see the troops roll down the streets for yourself? They are in Khabarovsk when news arrives that hard-line Communist Party members have staged a coup to take over the Soviet government from President Mikhail Gorbachev. Things are tense as KGB officers are seen huddling in front of Military buildings and troops roll down the streets in army trucks. (Tourists were cautioned not to take pictures but as you can see some did anyway.) 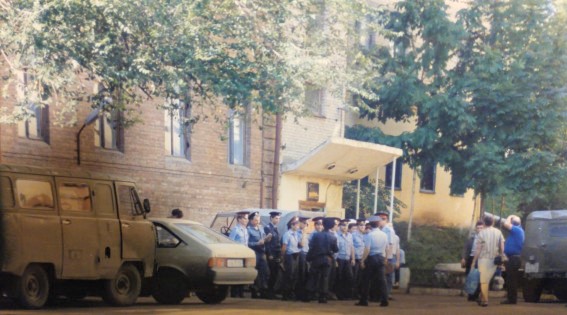 And then, after two days, the failed coup was over and Gorbachev was back in power.  But it was the beginning of the end of the USSR.

The Americans had been scheduled to fly back through Magadan but the city is closed and no one is getting in or out. They would have to fly directly to Nome instead, refuel, then continue on to Anchorage.

When the plane reaches its final destination it is met by TV crews and my mother is one of the first to be interviewed. Was she afraid at any time while she was there?  No, she replied honestly. It had all been so interesting, there was no time to be afraid.

Years later I am going through her scrapbook to write this story and come across a handwritten letter from a friend they made while in Russia.  It read in part, “Do you remember my state of mind on that terrible day – the 19th of August.  All of us were greatly depressed that there existed a probability of democracy defeat in our country those days.  Thank God, it never happened though we still have no surety of a better life.”

I don’t know whether they attained to a better life or not. But as I consider these words I am reminded that we are really not that different.  People all over the world have the same needs and wants, aspirations and struggles, for freedom and a good and decent life.   It is still true that there are no guarantees.