In the middle of a rainy April we picked the sunniest day for a walk at Flaming Geyser State Park where instead of a flame we found a flowing river, luscious forest and steelhead in  training – who knew there was such a thing?

To get there we took the scenic route from Auburn through the quiet pastures and farmland of the Green River Valley, which eventually led to the bridge into the park.

There we took the trail into the forest alongside the Green River where all was fragrant and lush and mossy green. 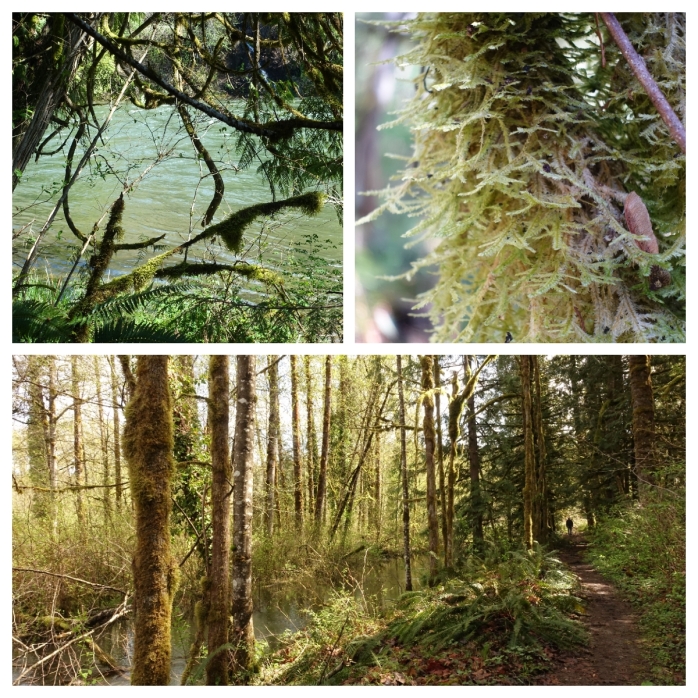 We emerged later near the Flaming Geyser for which the park was named – though we were a few years late getting to it.

According to Wikipedia, “The park was named for a flame which burned through a concrete basin, fueled by a methane gas pocket 1,000 feet below the surface. When the pocket was discovered by prospective coal miners in the early 1900s, the test hole hit gas and saltwater, shooting water and flames 25 feet into the air. The same methane pocket seeps gas through a mud hole to create the “Bubbling Geyser” nearby. Both “geysers” can be found along a short hike, though as of 2016 the flaming geyser is no longer lit due to depletion of its methane source.”

But we did get to see summer steelhead sporting about in the conditioning pond which prepares them for release.

Flaming Geyser State Park has over 500 acres including three miles of shoreline.  There were many other trails to explore but we were running out of time and would have to save them for another day.  We headed back to where we started, taking a different route next to marshy wetlands filled with birdsong.

It was still and quiet, but at the same time full of activity. I walked slowly hoping to capture pictures of the frogs and birds but they moved too quickly or managed to stay hidden.

While I lingered Bob went ahead and found a place to sit, then called me over when I caught up with him to look at these.

“Daisies,” he said. “Aren’t they pretty?  Everyone walks by without really noticing them. I think they’re happy when someone stops to appreciate them.”

And so we did.

← Something there is that loves a Bridge!
Benji is the Best Medicine →

13 Comments on “Flaming Geyser State Park, A Missing Flame and Steelhead in Training”