The Shared Experience of the Solar Eclipse

Greetings from Alki Beach in Seattle where we experienced the 2017 Solar Eclipse. Yes, it was awesome.  And no, I didn’t plan to watch it from here. I woke up this morning bright and early to clear blue skies and a brightly shining sun (did he know what was coming?), ready for the big day. 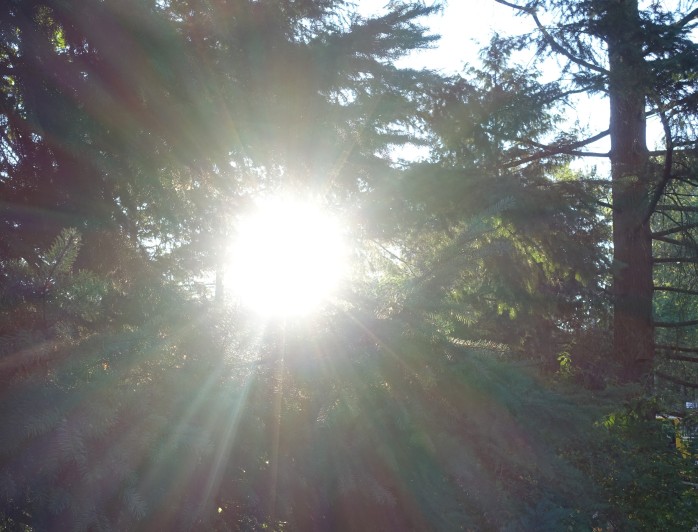 We planned to go to the Boeing Museum of Flight where they were handing out 1,000 pairs of solar glasses to watch the eclipse; inside it would be live streamed from around the country. Perfect!  I thought.  What better place to watch an eclipse than with the sky experts?  Certainly 1,000 pairs is a lot, is it not?  And so we arrived at 8:30 a.m., early enough to obtain the glasses we thought, and if not, at least early enough to watch it on the big screen inside (stifle your laughter right now.)  But ten minutes from the Museum the traffic slowed considerably and it wasn’t long after that we saw the line which seemed to go on for miles and miles and miles and it was then that we realized we were very late to the dance, unlike these people near the front.

So then dear, where shall we go now? I asked the driver.

And that is how we ended up at Alki Beach in West Seattle where we found great views of the City (periodically shrouded in fog), plenty of free parking, and lots of fellow eclipse watchers, many equipped with the coveted glasses and many, very happy to share them.  As twilight descended almost imperceptibly upon us, there was quiet, friendly, chatter, a passing of the solar approved glasses and a marveling at what we were witnessing. 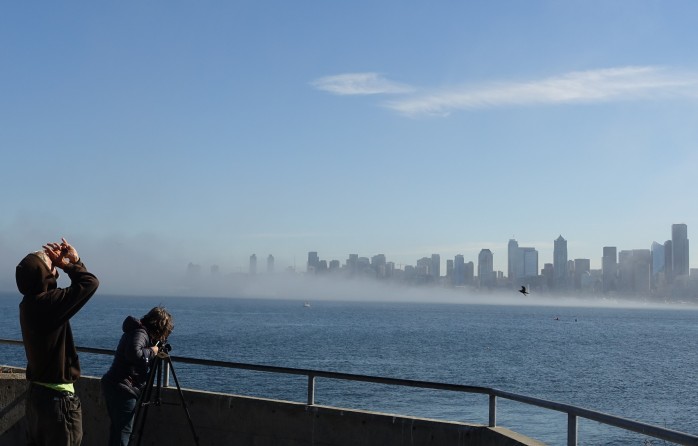 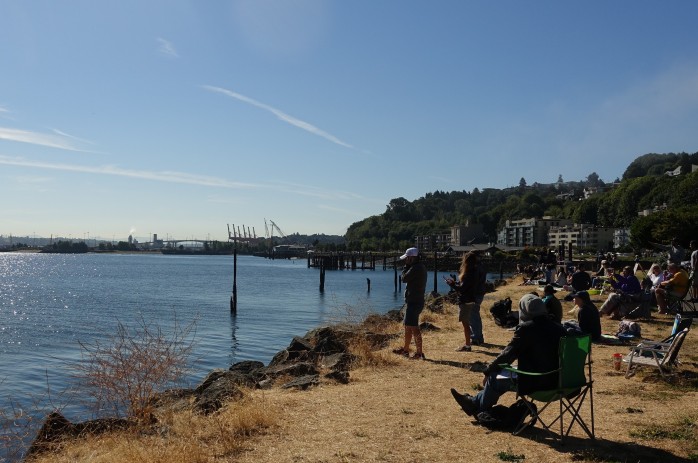 No, we were not in the path of totality so we didn’t have complete darkness.  But we did experience a mysterious dimming of the lights that’s hard to describe.  Kind of like you were wearing sunglasses, someone said.  And when I was offered the solar glasses at various stages, I had those few seconds to peer into another realm, where I saw a waning orange sun and a dark moon creeping across its face, until the sun became a slim crescent.

When the time of peak darkness was over, we said goodbye and went for a walk on the beach.  The tide was as far out as we’d ever seen it; coincidence or not, we don’t know.

As the sun slowly reemerged, ‘Here Comes the Sun’ played on the radio nearby. An awesome experience.  I hope I live long enough to see another.

6 Comments on “The Shared Experience of the Solar Eclipse”