He spoke straight and with a heavy Russian accent.  Our neighbor and handyman had been working for hours in the rain carrying off sludgy pine needles from our roof and gutters to a remote corner in our backyard using a large wheelbarrow.  He wore a round cap over his long hair making him look like a Dutch boy. He was a nice man and hard worker. I don’t think he was having an easy time of it in his adopted country.

“What? “  I asked with alarm.   “Are you sure you don’t mean the little cat statue made of concrete?”

The stony sleeping cat was a memorial to one we had lost years before.   The cat’s name was Benjamin, the same as our handyman.   He was a beautiful Himalayan with true blue eyes and long white hair streaked with silver and gray.  I had lost another cat named Joey more recently to heart failure.  It was totally unexpected and I was still heartbroken.  We got Tiger shortly afterwards.

I tried to explain though it seemed odd that I would need to.  I still believed he saw our cat memorial figure and not a dead cat.  But my luck with cats had turned of late and part of me feared for the worst.  I couldn’t take another loss.

“No.”  He laughed and looked at his feet.  “We had guinea pigs before.”

It was getting dark.  I wondered how he could have killed my cat.  Was he overly zealous with shovel or wheelbarrow?  No.  It couldn’t be.

“Are you sure it was a real cat? It must be the concrete one you saw. It’s white and looks like it’s sleeping.”

Tiger wasn’t white but he did have a soft white underbelly. I dared not go and look for fear of finding him with those beautiful green eyes frozen in death. I left Benjamin to find my husband.

“Bob,” I said with a tearful voice. “Ben said there’s a dead cat in the backyard.  Please. You go look.  I just can’t bear the thought of losing Tiger.”

So he went out in the waning light of dusk with flashlight in hand, and scoured the area near the brush pile but found nothing.  I waited in tearful silence. He returned  to ask Benjamin where he saw the dead cat and was taken to the stony white memorial to our old cat named Ben.

A misunderstanding.  A case of mistaken identity.

I hear laughter.  I am relieved but not laughing.

Epilogue:  This little saga happened early last year and at the time I almost felt like an observer to the strange conversation.  It seemed to me a curious little window into cultural and language differences and the value of pets. But mostly I was happy that my sweet Tiger boy was alive and well and Benjamin’s memorial remained intact. 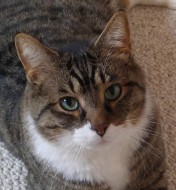 ← Gray skies and post vacation doldrums..
Go outside and play she said →

5 Comments on “The Handyman”