Apparently every 10 years or so we hear the call to go north.  So for the past few weeks I’ve been putting together our next road trip to the Canadian Rockies. This got me going through my old scrap books (I used to do a lot of them before the digital age) and I was reminded that this will be our 4th such trek northward.

As I do for all my vacation planning, I visited AAA for maps and tour books and also bought lonely planet’s guide to ‘Banff, Jasper & Glacier National Parks.’  Thus I began plotting our route and making the necessary camping and lodging arrangements for the coming trip (in the nick of time it turns out).  Our current plan is to head east to Glacier National Park in Montana, north into Alberta with a stop in Calgary, to Banff, Lake Louise, the Icefields Parkway and to the northernmost point in our trip, Jasper.  We’ll return west and south through British Columbia and home again to Washington.  A nice packed loop.

The first time we made such a trip was in the last century (I love saying that) and we were, needless to say, younger than we are today.  We hiked to some of the most popular and spectacular vistas in the Rockies without much thought given to the length or difficulty of the trail. (Okay, mostly true. We’ve never been mountain climbers.)

I took the picture below on a hike to Mt Edith Cavell where Angel Glacier hangs from the side of the mountain. 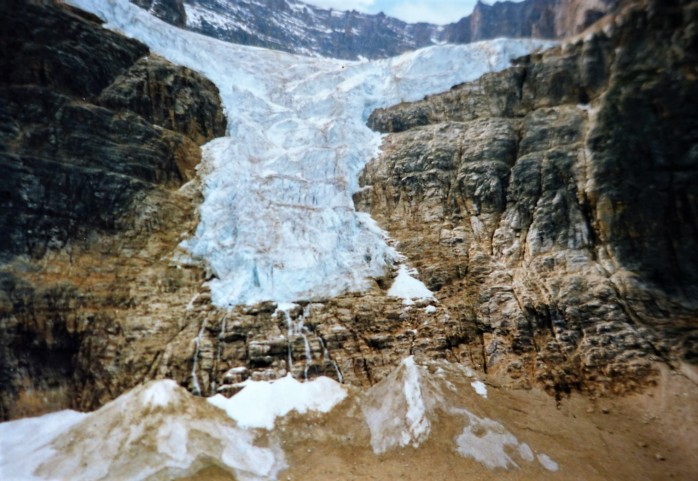 We also hiked the famous trail from Lake Louise to the Agnes Teahouse and the Beehives and I don’t remember it being particularly hard.  So I was surprised to read in ‘lonely planet’ that we had gained 1,624 feet in elevation on this ‘moderate to difficult’ trail.  Surprised, because these days I tend to look for ‘easy to moderate’ with minimal elevation gain. What a difference a century makes!

According to lonely planet, “It’s a fine, well-marked route taking in forest trails, hidden lakes and scenic viewpoints, as well as a famous teahouse ~ but it is formidably steep (especially around the Big Beehive), so bring plenty of water and take regular rests.”  It goes on to say that after leaving the teahouse you will reach the Big Beehive after a mile of “relentless leg-shredding switchbacks.”   Apparently there was a time when I hiked trails with leg-shredding switchbacks. Not so much today. So just in case we don’t make it up there again (thinking we won’t but hey, you never know) I give you this picture of Lake Louise from the Beehives as proof of my previous climb. 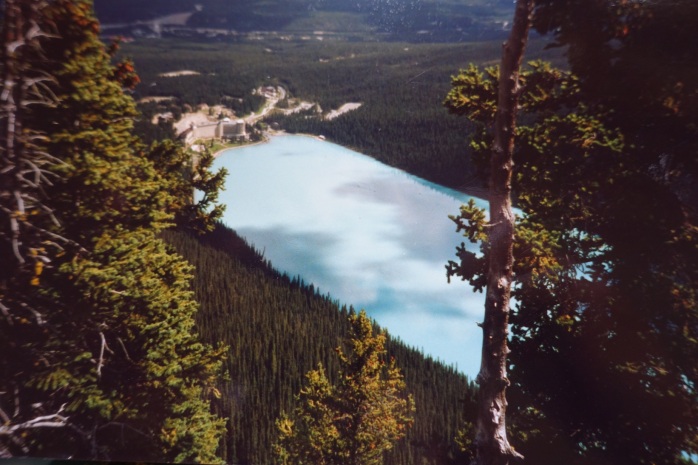 No that is not a big swimming pool, it is the true and actual Lake Louise when viewed from above. Chateau Lake Louise is on the left far, far below.  And yes, I really did take that picture.

By the way, this reminds me of the time we brought a group of 20 teenagers to this very spot on our second trip about 10 years later. Some of them got so close to the edge of the cliff on that same hike that I had to pull them back from the brink while reminding them that there were no guard rails and we were in fact in the wilderness.  Even now I shudder to think of the responsibility we bore to bring all those teenagers home again to their parents and preferably in one piece.  (Sometimes I ask myself,  “what were we thinking??, did we really do that??” and the answer is yes we did!  And had a good time too!)

Here are a few more pictures from the Canadian Rockies from those first 2 trips. 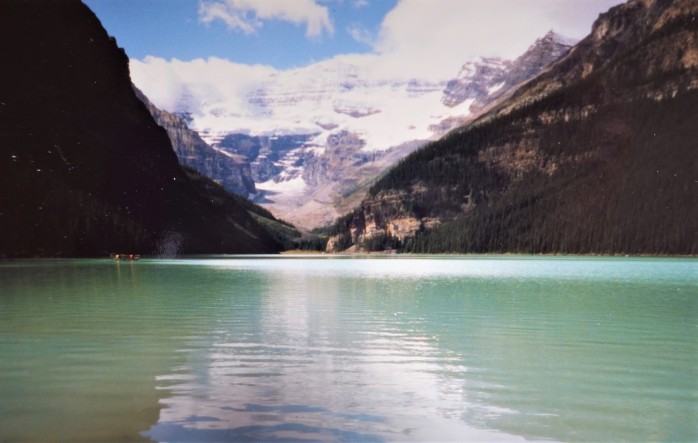 the ever young husband at Moraine Lake: 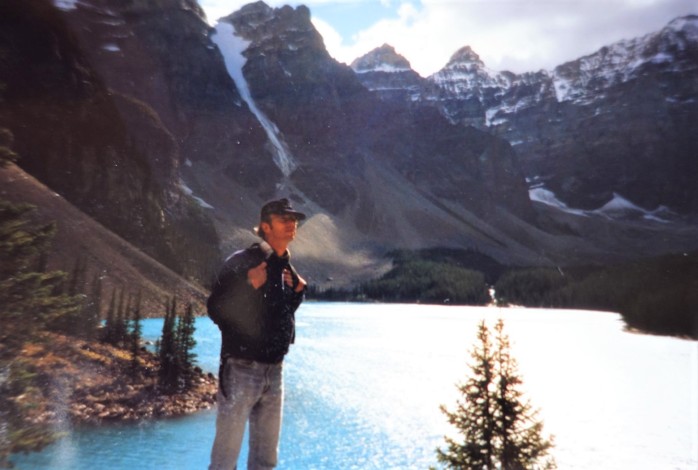 Our third trip north came roughly 10 years later, this time in the month of May and finally in this century.  We dropped Jasper from the itinerary and added the nearer Waterton Lakes which is on the other side of the border from Glacier.  Though smaller in scale we found it to be as beautiful, quieter, and less crowded than the larger parks to the north.

From Waterton Lakes we went on to Banff and Lake Louise,  where this time we found the lovely lady mostly covered in ice and not the same milky green we remembered from our summer trips. 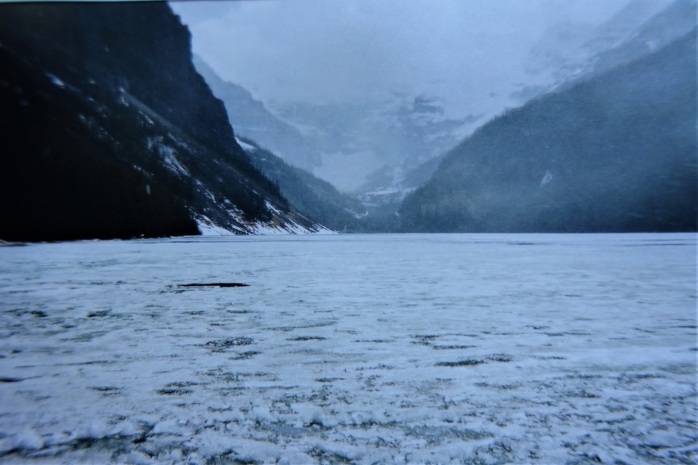 So here we are again, embarking on trip #4, coincidentally almost 10 years after the last one.  Aside from the people in the pictures, I wonder what else has changed?  How will we find Lake Louise this time?  Will we hike to the Beehives?  Or be content with memories and photos from earlier treks, finding new adventures closer to the ground?  Stay tuned for answers to these compelling questions and to view the pictures from our latest trip to the Canadian Rockies.